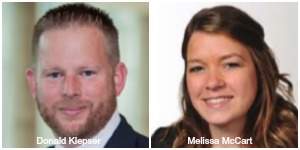 Alexandria, Va., Dec. 1, 2018 — The Journal of Managed Care & Specialty Pharmacy (JMCP) is pleased to announce the addition of two experienced managed care pharmacy experts to the JMCP editorial team. The move addresses recent growth of the publication, which has seen author submissions increase by 20% during the past two years compared with the prior two-year period.

Donald Klepser, PhD, MBA: Associate Professor and Vice Chair of Pharmacy Practice and Science at the University of Nebraska, College of Pharmacy. Dr. Klepser’s research over the past 15 years has been focused on improving medication use and the expanded role of the community pharmacist. In particular, he has looked at the effects of plan design on medication use and adherence and the use of point-of-care testing in pharmacy settings to improve healthcare access and outcomes. Dr. Klepser earned his PhD in Pharmaceutical Socioeconomics from the University of Iowa College of Pharmacy and his MBA from the University of Minnesota’s Carlson School of Management.

“I am delighted to welcome these two editors who have a long history with the journal,” says JMCP Editor-in-Chief Laura E. Happe, PharmD, MPH. “Dr. Klepser has been on the editorial advisory board for four years, and Dr. McCart previously served as an interim Assistant Editor. Their respective expertise in pharmacy practice and outcomes research round out the skill sets of JMCP’s editorial staff.”

Their addition also will allow JMCP to keep up with a rapidly growing submission rate. The average time it takes JMCP to make a first decision on author submissions is six weeks, including peer review. Authors also have the option of selecting Express E-publication to get their articles published within five weeks after acceptance.

Meanwhile, JMCP continues to raise its influence among peer journals. JMCP has an impact factor of 2.5, meaning the average article in JMCP was cited 2.5 times by other researchers, placing JMCP near the top 20 percent of journals.

“Simply stated, JMCP is putting the data and information payers want in the journal they read,” says Happe. “The growth in submissions to JMCP is reflective of the increase in managed care pharmacy research being conducted, the continued importance of peer-reviewed research, and finally, a fast and fair author experience.”

About JMCP — The Journal of Managed Care & Specialty Pharmacy publishes peer-reviewed original research manuscripts, subject reviews, and other content intended to advance the use of the scientific method, including the interpretation of research findings in managed care pharmacy. It is dedicated to improving the quality of patient care by providing its readers with the results of scientific investigation and evaluation of clinical, health, service, and economic outcomes of pharmacy services and pharmaceutical interventions, including formulary management. www.jmcp.org.